This weekend we remember Conway on the 28th anniversary of his death. How can it possibly have been that long? I still remember that tragic day and what I was doing when I heard the news like it was yesterday. I know some people probably think it's crazy to feel such a strong emotional attachment to someone you never met, but short of the loss of close family and beloved pets, I've shed more tears for him than anyone else. Even after all these years this is a very difficult day for me.

One of my favorite things to collect on Conway is ephemera. Paper items are so readily thrown away by most people, making them more of a challenge to find and all the more special when you do. Today's spotlight is on some of my most notable newspapers, clippings, and magazines from June 1993. 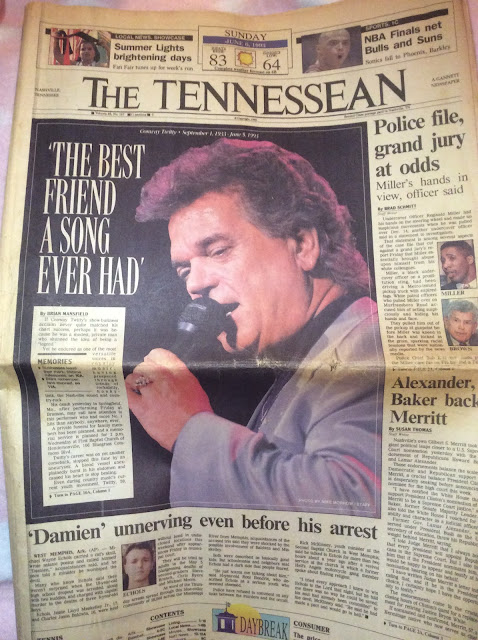 Thanks to good friends and fellow collectors I've been able to get my hands on some of the newspapers that came out in Nashville the week of his death, which was also Fan Fair week. This is the front section of The Tennessean from Sunday, June 6th. They did an amazing job with their coverage in spite of his death coming as such a complete shock to everyone. I adore the photo they used on the front page and would love to have an 8x10 of it. 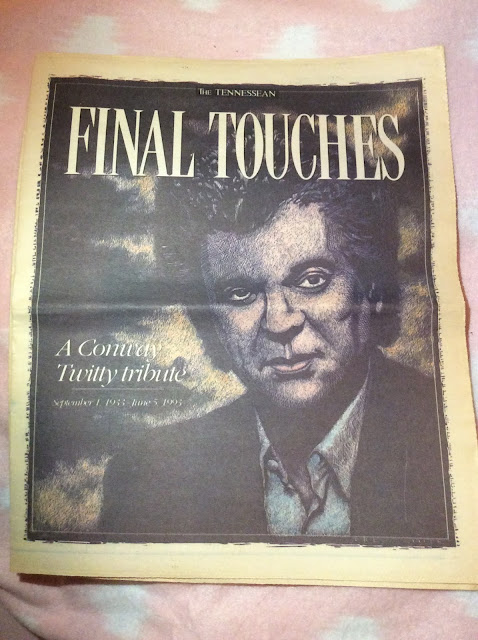 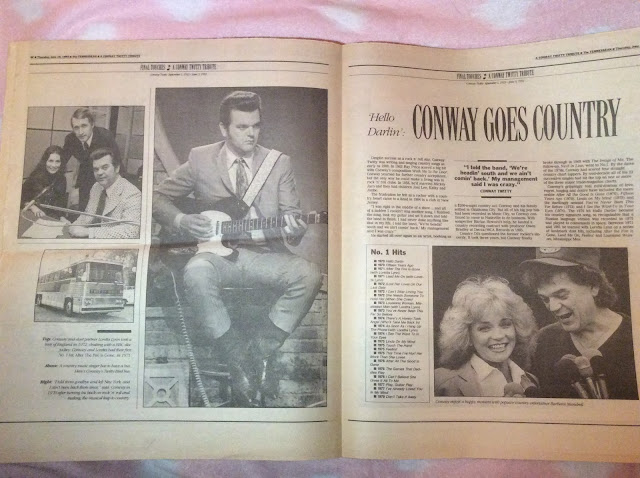 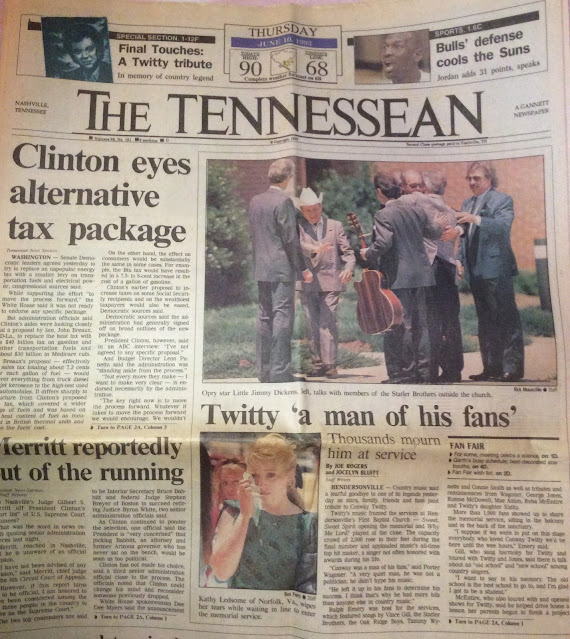 The day after Conway's June 9th memorial service The Tennessean included a special 12 page insert in the paper titled Final Touches. It's a beautiful retrospective on his life and career. 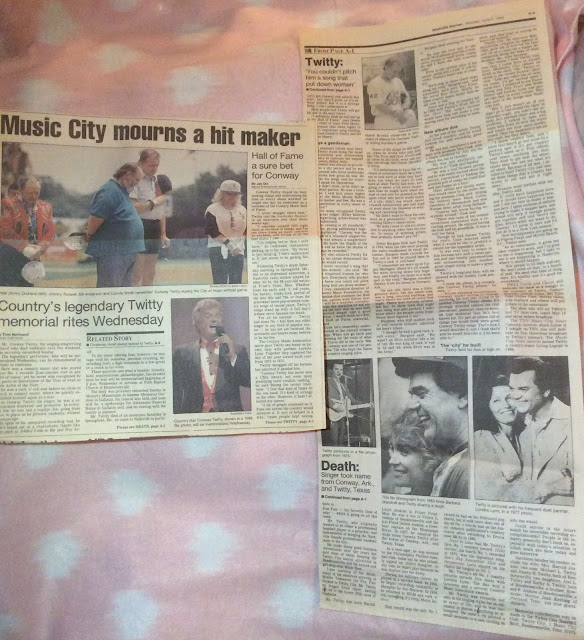 The Nashville Banner from June 7th 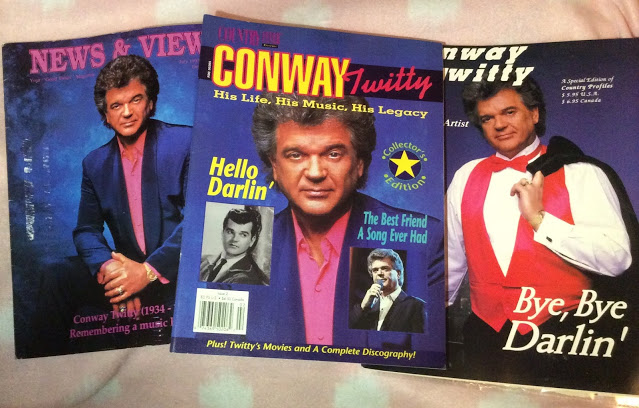 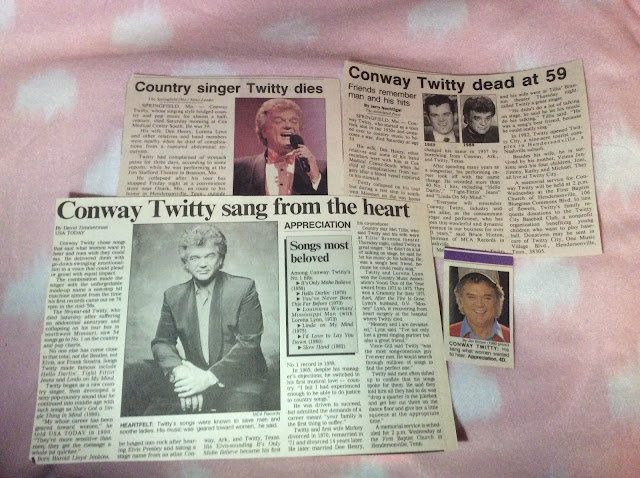 These are newspaper clippings from USA Today and my small local paper, both the front page and inside articles. This was long before my collection officially began, but I cut them out and tucked them inside one of the tribute magazines. I've never been a very organized person so I can't help but think my preserving them in this way was a premonition of the collector I would one day become. 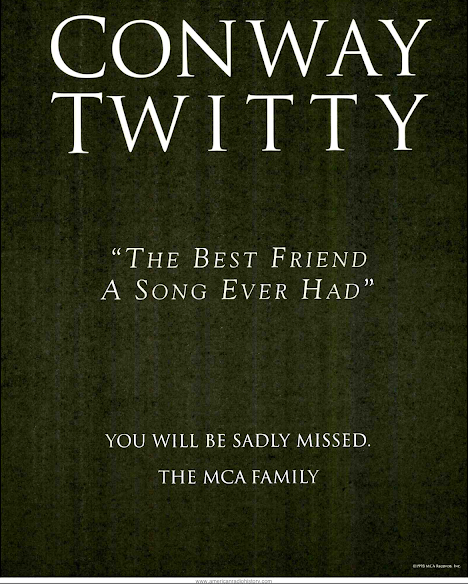 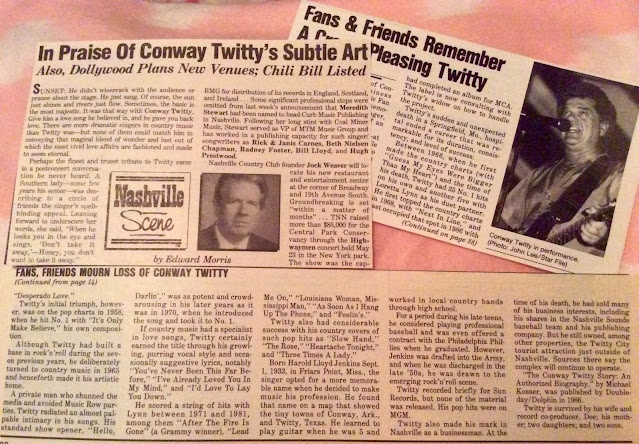 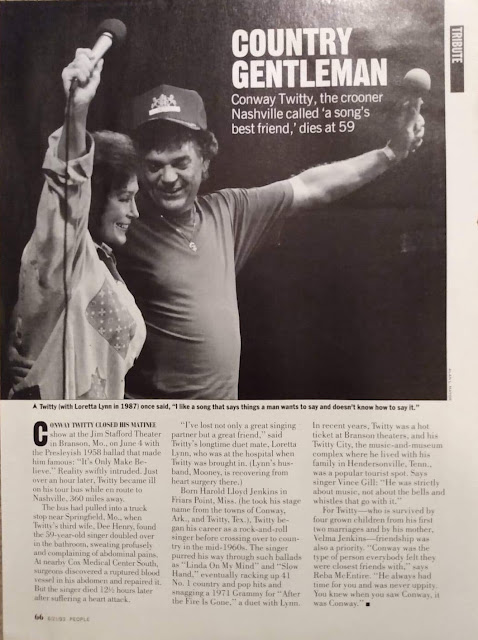 I found People magazine's single page tribute to be a huge disappointment. For a rock & roll pioneer and country music legend it was woefully inadequate, especially when other musicians have had entire commemorative issues dedicated to them.

On the other hand, in a life void of scandal unlike so many of his peers, they summed him up as exactly what he was, a country gentleman. And that's one of the many, many reasons I will always be...crazy in love with Conway.
Do you remember where you were and what you were doing when you found out we'd lost Conway? Did you save any newspapers or magazines from that time?

Popular posts from this blog

May 27, 2021
Boogie Grass Band I've Just Got To Know (How Loving You Would Be) She's A Woman All The Way Julie One Night Honeymoon Your Love Had Taken Me That High I've Been Around Enough To Know My Woman Knows That's All She Wrote You Were Named Co-Respondent Conway's final Owen Bradley produced album, 1978's Conway , shows his readiness to step outside the boundaries of the traditional sound that had so far defined his country career. It's still there on songs like I've Just Got to Know and My Woman Knows , but the sexy One Night Honeymoon  has an edgier vibe he would continue to explore in years to come as he took on the role of co-producer on his albums. The bluegrass-tinged Boogie Grass Band , the album's first cut and lead single which pays homage to Bill Monroe and the Allman Brothers, became a concert staple for years to come. (It's also my least favorite song Conway ever recorded, simply because bluegrass music isn't my cup of tea.) This record
Post a Comment
Read more

May 20, 2021
One of my goals for this blog is to shine a light on Conway-related places to visit, and today's travel destination is a very recent addition to the map... For a short time in the early 1950s Conway lived in the small eastern Alabama town of Smiths Station with the Carden family. (Hugh Carden would go on to become Conway's longtime business manager and co-executor of his estate.) He spent his time leading youth revivals in church   and even delivered the invocation at the Smiths Station High School’s 1951 Junior-Senior Banquet. Conway with Mattie Carden,  Opelika Observer There's an exhibit dedicated to Conway at the Historic Jones Store Museum , and this spring he was included on an interactive mural on the side of Rainbow Foods located at 2461 County Road 430. The mural was painted by  John Christian , founder of the Go Georgia Arts Mural Trail, and features a likeness of Conway from the cover of his  Twitty/This Time I've Hurt Her More Than She Loves Me album. Has an
Post a Comment
Read more